Up, breakfast, pack up and leave around nine as usual. While Arne is checking out, I chat with another bike traveller. He’s with a group of 80+ guys (I do mean a group of guys who’s older than 80) who do a four day bike tour every year since twenty years. They’re doing 50 km to Bocholt, we’re planning on doing about 80 to Anholt. It’s not actually that far, but as usual we’re taking the circuitous route. The weather is a bit chilly, maybe just below 20° and sunny at first, but pretty quickly low and threatening clouds take over the sky. We’re still fighting against the wind, sometimes it’s so strong I can hear it whistling through the structure of my bicycle helmet.

It’s a bit hilly too and sometimes it’s just not clear whether we’re going so slow because of the wind or because it’s going a bit uphill. I even put on an extra sublayer to keep of the windchill (you can picture what’s involved in putting on a sublayer if you’re wearing bicycle pants). We look for and find a bakery in Gemen, enjoying a break from the wind, a small lunch and the toilet facilities and take a muffin to go as we have done every day. It’s not a German invention, but they make them really well, still moist inside and with lots of chocolate. 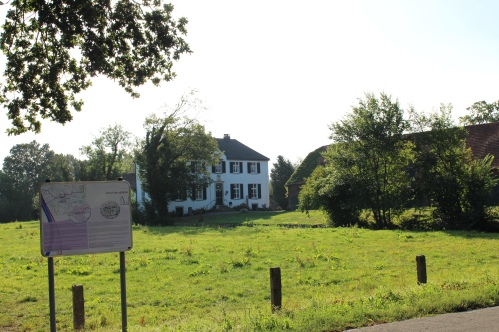 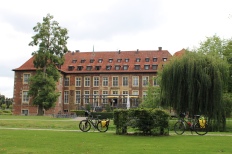 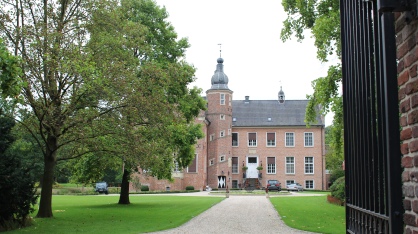 Schloss Rhede
We seem to have left the corn behind, we see more and more other, mysterious crops between the corn fields, as well as a lot of horse paddocks. Also less and less windmills (the modern, electric ones), does that mean there is generally speaking less wind here? We follow the tiny Bocholter Aa for a long stretch, then tarmac roads between the fields and have a very nice stretch through the woods just before Rhede. We were less bothered by the wind in the afternoon, probably because we were more sheltered in the woods but also because we tacked against the wind, never going due west but zigzagging north and south. We see hares several times, sprinting across harvested fields, also squirrels doing one of the many breaks, gathering nuts. We also learned that nuts bounce really high on asphalt when falling from the tree, a bit of a danger to the cyclist. It’s a beautiful though really inefficient route, with plenty of variation, often on small roads reserved for hikers and cyclists.

Some of the last few kilometers are on the Dutch-German border and when I say on, I mean we followed the exact border for a few kilometers. Easy to spot, since the left side of the street had German street names, bus stops and stores whereas the right side of the street was completely Dutch. I’m wondering if the tax difference between the two countries is manifested in which stores you’ll find on each side.

Lots of pretty castles on the way, they seem a bit bigger and more impressive here. Around six we arrive in Anholt, the counter is at 84 km, so we decide to take a shortcut direct to the hotel, instead of following the final loop around. We’ll stay for two nights and enjoy a relaxed day off, staying in the Schloss Anholt itself. It’s just so cool to drive the bike up the grandiose entry way, over the drawbridge and into the courtyard of the castle. Wash, dinner, no time for pictures or writing.

the hotel restaurant is in a veranda built into the moat at the back of the castle, looking out over the park. dessert was this delicious breadpudding with mascarpone ice cream