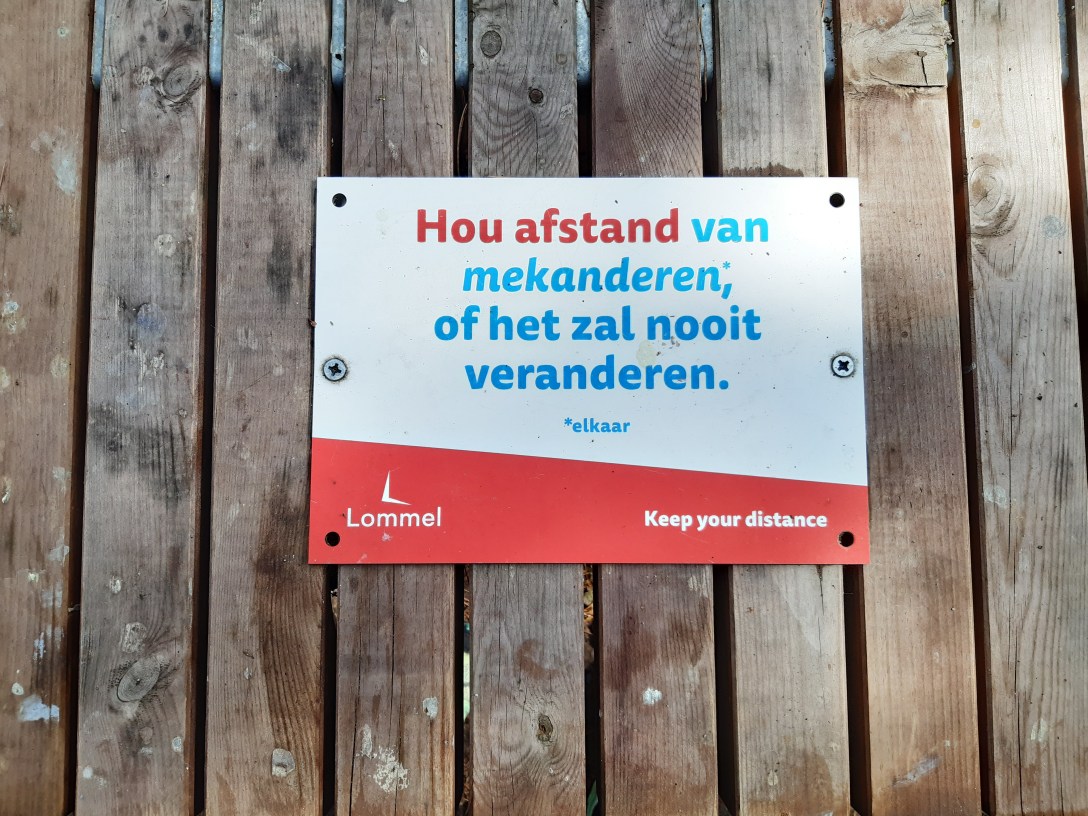 Up at 7:15 – no point in getting up earlier if breakfast is planned at 8 – and it’s raining still, or again. It’s supposed to rain a bit in the morning and then get drier, so we resolve to stick to the plan and go cycling again. We pack a lunch bag again from breakfast left overs, it doesn’t take long to pack – we encounter a beautiful Tegenaria parietina or ‘giant house spider’ on the carpeted floor – and we’re off around 9. We go to the same parking as yesterday and expect more people on this Saturday morning, but it’s still pretty empty. We take a moment to figure out which way to go and set off. It’s about 12° C but we’re expecting it to heat up and set off in shorts, tshirt and a windbreaker. Though it’s not raining now, the wind shakes the drops from the trees and creates its own little pitter-patter.

First stop: Fietsen door de bomen – ‘cycling through the trees’. It must get pretty busy here now and then because a sign indicates you must put on a mouth mask if you stop on the track. We turn onto the circular path and stop right at the highest point to take a few pictures. It’s cool and beautifully constructed, but not very spectacular. The beauty of such tree top paths is in seeing the forest from a different perspective and there’s just not much time for that on a bike.

Onwards! We’re following numbered waypoints today and I wrote them down on a little paper, the first difficulty was to get to the first point, the second one to figure out to go left our right at the split and then not following them in reverse order as we’d originally planned. It gets a bit more complicated when much later we find out I wrote the last line of numbers from right to left, but no worries, we have the route marked on the GSP app as well so it’s impossible to get lost.

A bit more people on the road today, the wind is chasing the clouds right off our bit of the map and the sun warms our backs. Mine can really use it too, I’m still not used to the forward posture on this bike.. Soon I can replace my windjacket with a woolly sweater, it quickly gets quite dirty from the splatter, no mudguards on this bike.

I specifically drew this route on the map to maximize time spent in forests, so we’re all over the place, even recognizing a few spots from our walk yesterday. A few surprises along the way require some online research: the heavily shielded area with military-looking defenses turns out to be the Ford proving grounds, where I assume they test drive Ford cars. The war cemetery we pass by is German, was created to permanently inter German soldiers – mainly from World War II – and is the biggest such cemetery in the Western EU outside of Germany. Always gives me a chill, even more so since we learned more about war during our trip along the Western front line of WW I.

When we turn into the Hunnebergstraat (the street of dolmen hill) I explain to Arne that this area is famous for its urn fields – burial grounds from the Iron Age – and a bit further on we see a sign towards such a field, pointing to a wide dirt track. I really want to see it, so we follow the track through a quiet bit of forest, past a childrens’ playground, .. and back to the road, without encountering the archeological site. Google Maps doesn’t know it either, so we give up and continue our route. We must come back to this area with the car and do an archeaological tour, I’ll remember to come well prepared and carefully note the different sites.

We follow waterways all the way to the village of Lommel and go out of our way to find a nice picnic spot in a small nature reserve. Lots of walkers here, obviously new here as they’re trying to find the way, perhaps a local activity? There’s some plaques on the benches here encouring people to keep social distance, using the local dialect: Hou afstand van mekanderen of het zal nooit veranderen. It seems everybody is getting used to COVID-19: mouth masks are mandatory and common in stores, public places like cinema’s, .. and restaurants. When we encounter people on the road, almost everybody makes an effort to leave 1.5m distance.

About a quarter of the way left to go.. I’m pretty tired already, honestly I’m usually a bit stronger than this. We go south through the Kattenbos (literally Cats Forest, though I suspect it refers to katje – the flowering part of willow trees, according to Google Translate also known as pussy willow) and then through the Pijnven to get back to the car. The bicycle road from Fietsen door de bomen to the car looks pretty busy now, so we freewheel it in the forest. The smaller paths are indicated as reserved for pedestrians, but the wider tracks are available for cyclists: it’s a bit slower, but much quieter. We even do bits of track that we did yesterday on foot as well. Back around half past two with the odometer counter at 52 km.

I nap a bit in the car and am totally refreshed when we arrive home. First job is usually to appease the cat, though she’s so ancient at this point that she’s a bit deaf and apparently doesn’t even hear us come in today. Could also be spite, I suppose, but I cannot tell if she’s awake because she’s hidden behind the books on the Ikea shelves. Nevermind, we’ll let her sleep or sulk as long as she wants. I make a quick mental list of stuff we urgently need and go to the local grocery store: spagettti pasta for tonight (with homemade sauce from the freezer), a Lotus ice cream for dessert and fruit and cottage cheese for tomorrow morning. We open a bottle of bubbles, enjoy a hot bath and generally relax the evening away.

Tomorrow is still a holiday, even though we’re just spending time at home. I plan to sweep the courtyard, take care of my backlog of laundry, make a pot of soup or two and take a sauna.