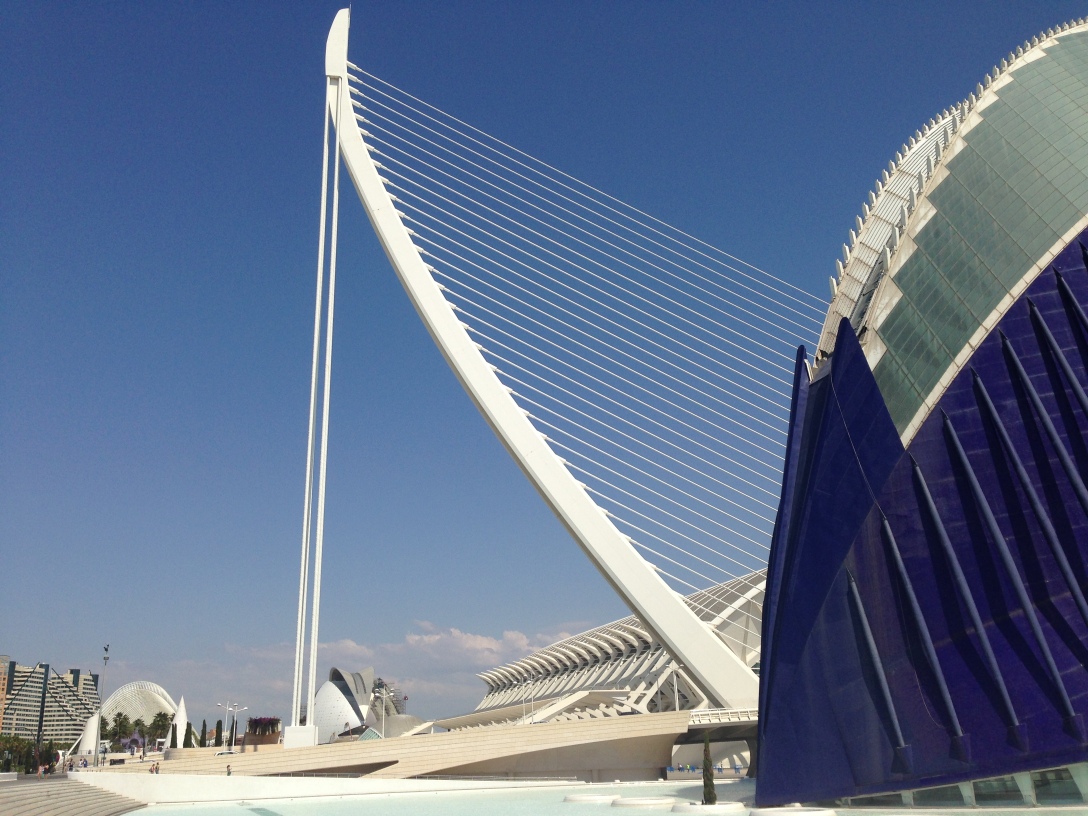 We had planned this day a couple of days earlier, so we drive to Valencia and know where to park. From the Bioparc parking we take the bikes and drive all the way around the center of town through the park that was laid in an old river bed. It is a wide park that still has bridges over it from the time it was still a river. There’s lots of people, both locals and annoying tourists that are not sticking to the proper bicycle paths. At the end of the park we see the City of arts and sciences, the first building of which was opened in 1998. These are giant concrete and glass constructions, where you can clearly see how the building is holding itself together.

So far so good, we cycle back to the town center to get some lunch. Once we get out of the park we get lost regularly and have trouble finding a way suitable for bikes. Also, the tourists are in the way 🙂

We sit down in a quiet square, surround by belgians and dutchmen, have to wait for the kitchen to open at 13h30 and then leave the center of town as quickly as we can (although not very efficiently, getting lost once again). Back to the parking at the Bioparc we mount our bikes on the car, put on an extra layer of sunscreen and head of into the zoo. The entrance is quite expensive (47.5 € for two) but it was worth it. It’s not big, but has several big areas where different animal species live together. this principle allows for big lots where there is always something to see, even if some of the animals are asleep in a corner.

The best part was Madagascar, which we visited with a guide in a small group. About 30 lemurs of different species are living in a big space, where you can walk through. If you don’t act scary, they don’t run away, so we get to see some very up close.

We have an ice cream (the first one of the holiday) at the café, which looks out to the Africa part. The sight I’ll remember best though is the sleeping aardvarks, which you don’t see often at all in zoos. We take all pictures here with Arne’s iPhone 5, because I’m pretty tired and don’t want to drag the lenses around. Back at the B&B we open a bottle of cava, take a bubble bath (again) and relax until it’s time to enjoy Gemma’s cooking once more.