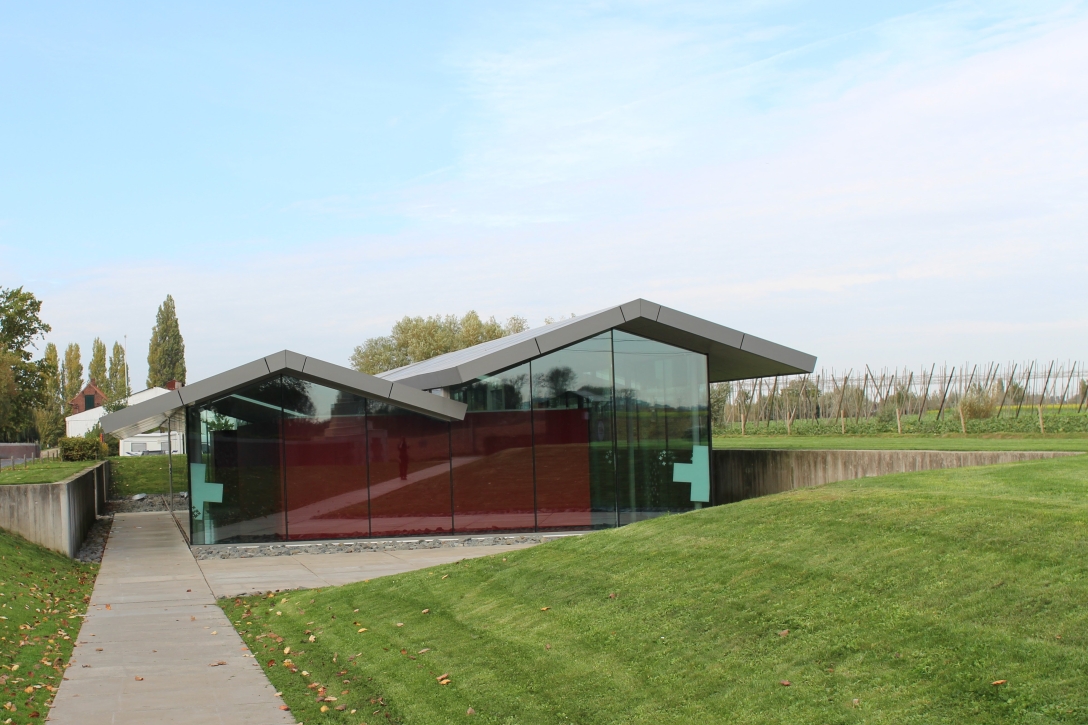 The In Flanders Fields museum in the centre of Ypres opens only at 10 am, so we have time for a leisurely breakfast before leaving the B&B. We see a few big buses so we expect a crowd and indeed we’re surrounded quickly by classes of schoolchildren. Doesn’t matter, the museum is nicely organized so the business does not get in the way of the experience, reading the info panels, watching videos of people telling the stories from diaries of some individuals who lived here during the war: a doctor and nurse, soldiers of different nationalities and sides, .. On top of this there are expositions of amunitions, gas masks, uniforms, etc. We take about two hours to visit the whole museum, I buy a book in the museum shop to learn more about the facts of this Great War: the museums are mostly focussed on local history so our general info has come mainly from Wikipedia so I think it would be good to get a more complete view.

During lunch we decide that we don’t feel like doing a second museum today, though we had planned to go to the Museum aan de Ijzer. Instead we drive to Lijssenthoek and visit the hospital cemetary and its museum there. It’s a small exhibition but it manages to convey a lot of interesting information about how medical care was organized at and behind the front lines, an aspect of warfare that we hadn’t yet learned about. The cemetery itself shows the progression of the war by how extensions were made to the original plot. There are some empty spaces in rows, where remains have been exhumed to be reinterred with their regiment or in their home town abroad and even some lonely headstones of graves that were added much later, such as that of a soldier who died in France but whose remains were moved here close to the grave of his brother at the request of their mother.

When driving to our hotel in De Panne we see a lot of road signs marking cemeteries, but it’s clear we are now behind the front lines, as we see few memorials. In Veurne we visit a small temporary exhibition about Marie Curie who travelled along the front line with her daughter to teach medical personnel how to use the radiography technology that she helped invent. It’s amazing that a woman who won two Noble prizes dropped her teaching and research work to come and help out with the pratical application of her work.

Tomorrow we’ll make our way back across the Ypres Salient to Menen but we haven’t yet decided which sites we’ll visit, there are simply too many to visit in two days.