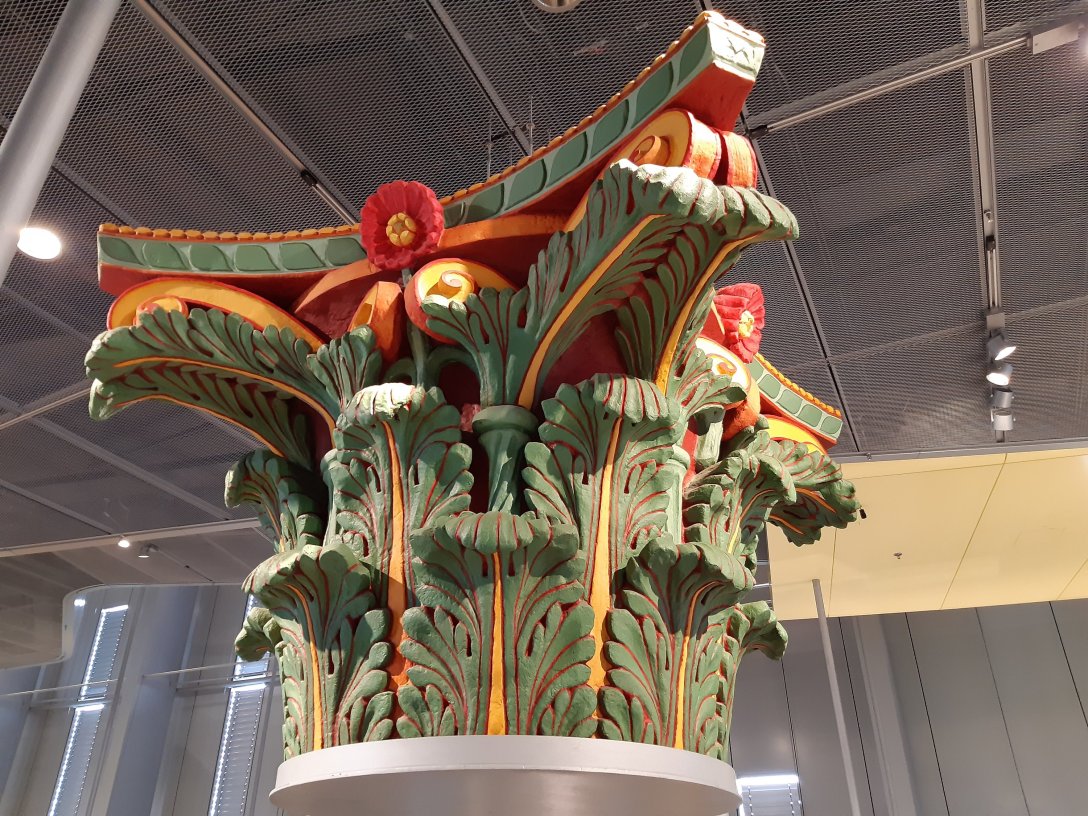 No idea where the exotic name comes from, doesn’t sound German at all, Xanten is a pretty little German town by the Rhein river. In Roman days it was a large city with its own legion, you can still see some of it now and that’s why we’re going there. After a big breakfast from the buffet, we gather out stuff, get some decent tape from the reception and start our activities today by fixing the mudguard on one of the bikes. It will hold, though it looks a bit silly. We seem to have the oldest bikes around anyway and we’re one of the few driving without the support of an electrical motor, so we don’t mind the shabby look.

We set out from Wesel under a threatening sky, just taking the essentials with us. There is a stiff wind against us but for now no rain, as we cross the big bridge to the other bank. The bicycle path to Xanten takes us through a nature reserve first, over wide paths following one of the many dikes. It reminds me of the landscape around the Schelde river in Belgium, where the water is sometimes allowed to overflow the banks until it meets the final high dike protecting the fields and houses beyond. Not many other cyclists around, can’t blame them for staying home, it’s cold and windy.

We park our bikes near the archealogical park, leave most of our stuff in a locker and set out to discover the sights. Some of it is partly rebuilt to show what it would have looked like and there are interesting displays of building and road construction techniques. They certainly have enough room to display whatever they like, the park covers most of the area originally between the walls, with a grid of tree lined lanes following the street grid. Ten thousand people lived here, so the city had temples, baths, a forum and amphitheatre. Almost all the buildings have disappeared because long after the fall of the city, the locals used the dressed stone to build houses and cathedrals. It’s interesting though to see the layout of the city, read about its inhabitants, economy and culture.

The most impressive visit is that of the roman museum and baths. The museum has many interesting pieces found on this site or nearby, including a large part of a river barge and a capitel stone of the temple, painted like it might have been during the heyday of the city.

Walking out of the walls we stroll through the old town of Xanten, in search of Kaffee und Kuchen. We have our piece of pie on the quiet market place before strolling by the old town walls back to the bikes. The sun has come out and the wind has turned a little, it looks like the ride back will be warm and easy – the opposite of the ride this morning. The ferry across the Rhein is closed due to technical problems but we don’t mind taking the same route back between the fields and over the dikes. We zoom back to the hotel, going so far as to take off the sweater and put on some sunscreen, quite unexpected after the grey and cloudy day!