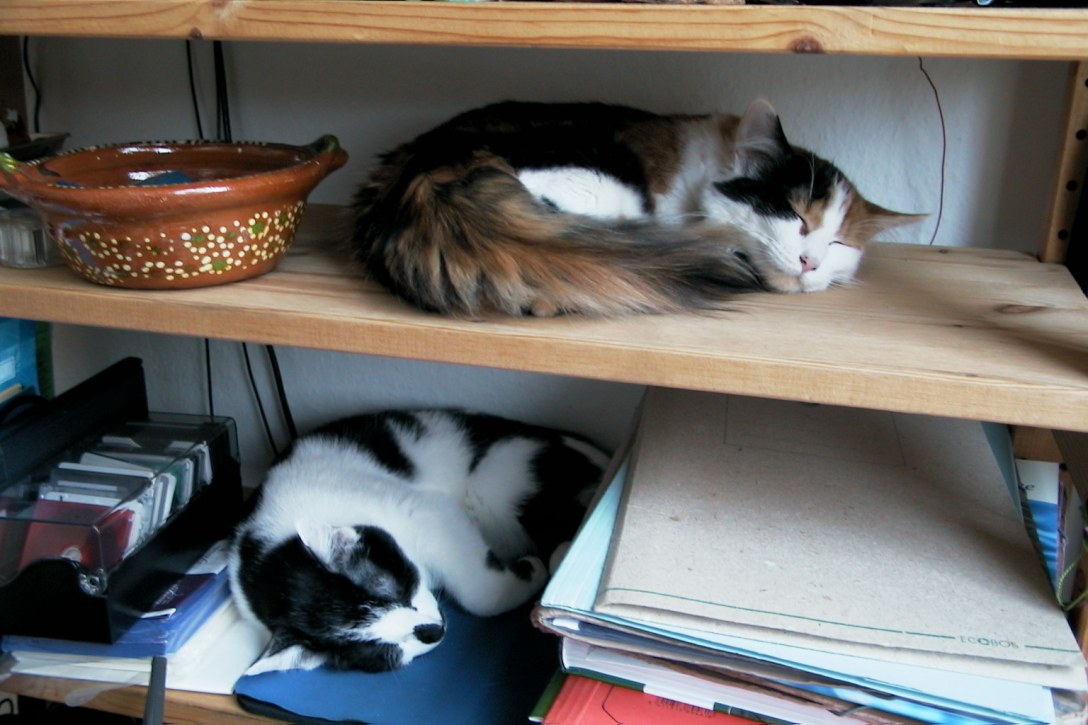 Maybe you think it’s a bit strange to write a cat’s biography, but as I’m new to it I picked my cats George and Alpha as the first subjects. I can’t interview them, but I have known them their whole lives so I should be able to get the facts straight. Admittedly it’s a time span of 17 years so I’ll have to dig in my memory, but no worries, I have lots of pictures to remind me.

George and Alpha are born in June 2003 in a nest of three kittens. From that nest we pick Alpha first (hence the name) and George second. Both with a pristine white belly, Alpha is a calico (did you know that almost all calico’s are girls?) and George has a butler’s black coat and pants (again, hence the name – to be pronounced with an English accent). The first few days they look like furry fat sausages, but soon they start crawling around and going places they shouldn’t. The mother isn’t very affectionate and we often see them sleeping or playing with their grandmother. I visit the house regularly and am simply fascinated to see them grow up from tiny helpless creatures to fearless adolescents. Alpha gets pretty sick, don’t know what’s wrong but she sneezes a lot. I let her sleep tucked against whatever body I have available to keep her warm and she pulls through.

In August 2003 my husband and I move to Germany, where I will spend a year as a university exchange student. While we move boxes and acquire our first IKEA furniture, the cats travel the 700 km in style. My in-laws drive over with a cat’s travel box on one back seat and a litter box on the other, connected with an improvised sleeve. The cats are not entirely happy with this arrangement, I’m guessing too energetic to sit still for so long. At a break when they are let out in the car for a moment, George is so startled by a nearby truck that he panics and scrambles back to the travel box, leaving behind scratches. Lesson learned for next time! They will travel that distance a few times, but none so eventful as the first. They don’t mind spending 7 hours in their small travel box, but are picky about music: they most definitely do not like the soundtrack of the movie ‘Hero’. We are so amazed at their pickiness that we actually put on different music – they stop caterwauling – and then put the Hero CD back on – the wailing recommences. Odd.

From the cats’ point of view our appartment in Konstanz has good and bad sides. They love the big computer screen, find sleeping places in the most unlikely spots and are fond of jumping to the highest summits of the furniture. A few times we see George on top of the kitchen door, so we must get into the habit of never closing it until we’re sure he’s not it. Alpha on the other hand likes small spaces and sleeps in the paper tray of the printer or in between the paperbacks on the book shelves.

At night wars play out, the two cats chasing each other around the room – this includes over the bed and any persons sleeping in it – and generally making a ruckus. George is getting bigger than his sister Alpha, though they both keep a slim, sleek appearance for now. For the first time in their lives they are apart when at the end of 2003 we bring them one by one to the vet to get neutered. Alpha is completely lost without her brother and follows me around the whole day he’s gone, never straying more than a meter or so away. When I bring him home in his travel box she sniffs at it and then quietly snuggles up to it the whole evening, while he sleeps off the operation. They’re soon back to normal.

The downside of this tiny apartment is the lack of safe space to play outside. There is a huge terrace but it is too easy to reach the street and we worry they will get to the busy road/railroad and get hit. We decide to buy two cat harnesses and long nylon cords and let them out on a leash. George doesn’t mind the harness at all, he enjoys laying on the closet near the open doors or investigating insect activity in the neighbors’ patch of grass. Alpha seems to object to the principle of it and goes completely limp (like a rag, it’s ridiculous to see) when you put on the harness, stubbornly staying down for a few minutes before being tempted up by the smells wafting in. One time she manages to hop a low fence in such a way that the long length of nylon loops over the ornaments, the free end getting shorter and shorter until she has barely enough leash left to reach the ground.

In the summer of 2004 we move back to Belgium, a bigger apartment but still no garden for the cats to enjoy. When they arrive they predictably seek the highest spot again and jump to the top of the bathroom vanity closet, guarding the mirror like two sphinxes. We put our 2 m high IKEA book racks against one long wall and they enjoy sleeping on the top shelf or behind the books against the wall. We get used to the sounds they make on the racks: we hear them clamber up these racks like they’re acrobats or a heavy thump when they jump down from the top. Sometimes if we listen carefully we can hear them snoring in their hidden spots.

George likes to be hugged so he often comes to lay on a stomach or shoulder while we’re in the couch. He doesn’t mind if you stand up to get a glass of water, as long as you keep him from sliding off. Alpha prefers to be left alone and waits until everybody’s out of the way before moving around the apartment, hopping away when you come too close.

George weights about 5 kg now but he’s still very lean. Alpha is only at 3 kg but looks almost as big as her brother. Her fur is so thick and luxurious that she loses the sharp cat shape, so we nickname her bunny. All in all they have quiet cat lives: sleep, eat, hug. One winter they learn they don’t like snow, but when spring comes they have fun catching the flies. They eat them too. The difference between these two can be summarized easily: she is very cute but grumpy, he’s a bit homely but very affectionate.

When we move again in 2010 they extend the fly catching activities to the new garden, but otherwise continue their usual routine. I think they’re happy that their shelves and books moved too, so they can sleep in their old spot even if it’s now standing against a new wall. They hide there when people come visiting, as they really don’t like strangers. Even frequent visitors are disdained and the cats will trot off to one of their hidden sleeping spots as soon as the doorbell rings. They go hide under the bed blanket and simply fall asleep there, only coming out hours later, all sleepy-eyed. You can imagine we learn to be careful when sitting down on the bed. Actually, we need to careful with any kind of big pile of fabric, whether is laundry, sheets on the floor ready for washing, .. don’t suddenly move it or risk startling the cat hiding in it.

Alpha is too shy to be adventurous and it’s always George that gets into trouble. He escapes the courtyard chasing a competitor and goes on a walkabout in the neighboring gardens, but is then unable to climb back in! We have trouble – and nearly a heart attack – luring him in through the front door near a busy street. Later, when two blackbirds build a nest low in the climbing hydrangea one spring, he’s still spry enough to catch them while they’re hunting for food on the ground. We are sad but not surprised when one day we find lots of feathers in the living room and have to dispose of the little bodies..

The worst event of his happy cat life is when he falls into a hidden compartment behind our kitchen closet. It’s a high narrow hole and he falls into it from the top, maybe 2.5 m, we hadn’t even realized that there was a hole! We can hear him moving and whining so we’re pretty sure he’s not badly hurt, however we have no idea how to get him out without demolishing the kitchen. We haul the fridge out of its dock, my dad comes over with his tool box and we start drilling holes. Meanwhile my mother-in-law suggests we hang down a sturdy sheet to allow him to climb out himself. Almost more frantic than the cat himself we pursue both solutions, but finally the sound of the drill scares him so badly he scrambles up the sheet and saves himself.

Suddenly we start noticing they are getting old: George is having trouble jumping up to his high sleeping spots. The vet suspects it’s simply a slight joint pain from old age and recommends special joint care food. That seems to help, though he’s also using the stepping boxes we’ve added around the house: each high surface like window sill or desk is reachable by steps never higher than his own body length, mostly made up of painted wine boxes filled with books. Alpha just keeps hopping and climbing up up up. Whereas before they were sleeping a lot, now they sleep more or less all the time.

We take both of them to the vet for a general check-up: George is still his same old self but Alpha is behaving oddly, so we want to make sure she doesn’t have some painful disease that we don’t know about. Turns out that even at 16 years old Alpha’s health is fine! Her changed behavior might be due to deafness or dementia, but physically she’s doing well. We decide not too worry about it too much, she’s become much more sociable and affectionate and is now usually found impersonating a pillow in the couch. You have to be careful though, you might think she’s sleeping but when you make a move to sit down she will hop up and start walking around on the pillows, in exactly the spot you were aiming to sit down in. Caution advised when using this couch.

George on the other hand is developing kidney problems.. A second blood test a few months later shows his kidneys are declining further, so we switch to special food for renal patient cats. Pretty expensive, but we want to make his final months comfortable. The biggest problem is getting him to eat: we try out different brands and flavors and discover that he prefers wet food, finely mixed to a thin paste that he can lick off a plate. Though only if it’s fresh from the fridge and if you’re standing close by. So now, when he looks at the plate, we hop to the fridge, grab the morning’s mix and hurry to give him a teaspoon. Seems elaborate, but so far he’s holding on to his weight of 2.9 kg… It’s difficult to see him walk around so slowly and carefully, but just today when I was sitting in the veranda, we lifted him onto his favorite pillow on my lap and he lay purring in the sun. Not such a bad way to enjoy the last days.

2 thoughts on “The boring cat lives of George and Alpha”