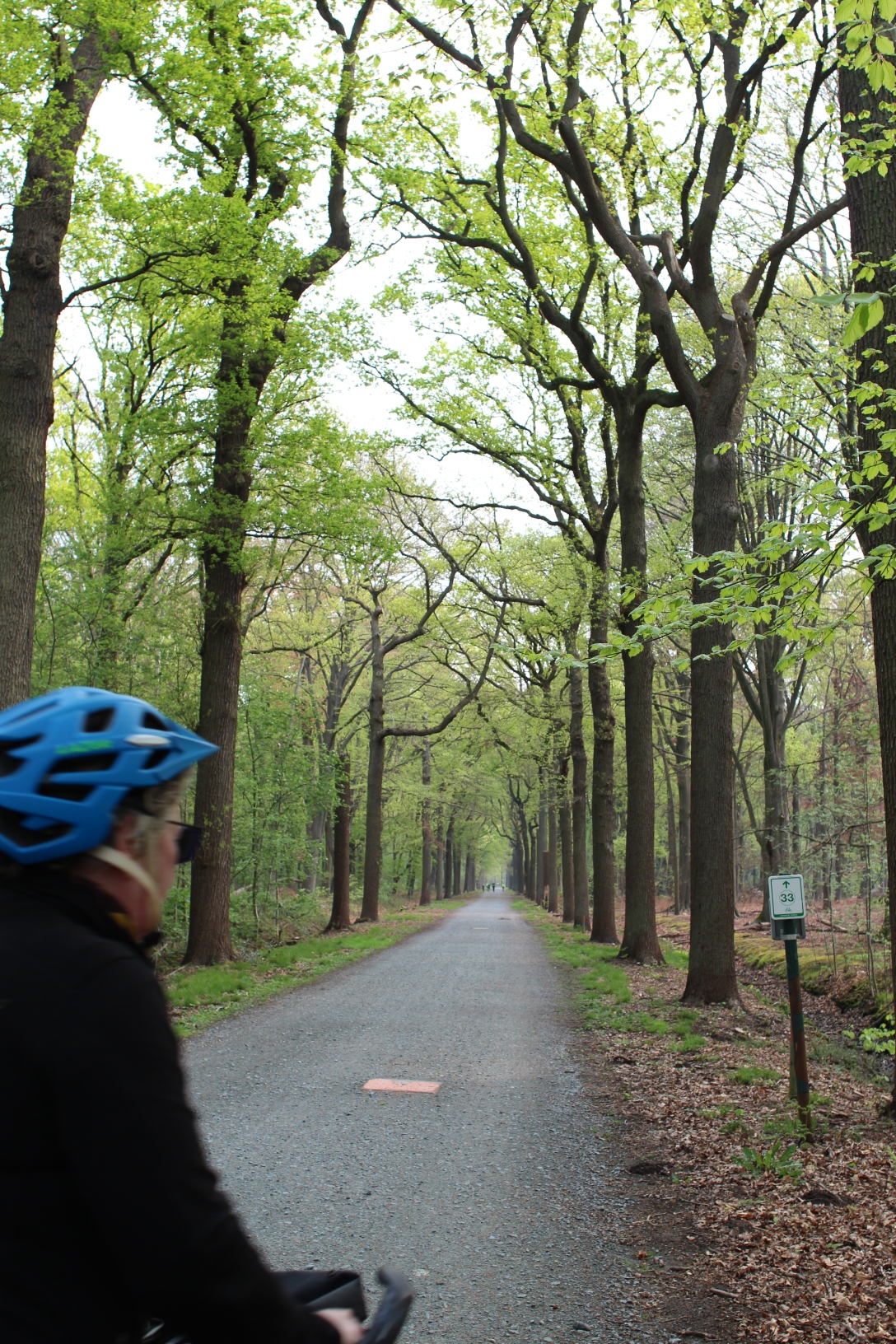 Another quarantine week, so again I’m looking for a way to burn off some energy and spend time outside. Since I spend all day every day at home in the same company, I also simply need some time away. I call my mom again and we decide to do another long bike tour. Since we can’t take the car to drive to a different region, I look at the local map, pick some random spots I haven’t done yet by bike and connect the dots into a long loop of about 70 km. It’s supposed to be a warm and sunny day but as I ride to the meeting point at 8:30 it’s still pretty chilly and cloudy. I’m optimistic so I left the house in warm-weather gear: short cycling pants, a synthetic warm-weather tshirt and a wind jacket on top. Fortunately I brought a thermos of mint tea and a spare merino wool tshirt to warm me up if I need it.

Along the way to Antwerp city I try to spot the old Agfa-Gevaert chimney: this 68 m high brick tower from 1928 has hosted the same pair of peregrine falcons every spring since 2007. This year the planned renovations to the chimney were postponed because the birds didn’t care for the new nest box installed close by, so they reopened the old nest box to let them raise another nest of chicks. You can see the nest via webcam here (the page also has a few archive videos of the eggs hatching), but I would like to see the tower itself. I mean, how hard can it be to find a 68 m high brick chimney in a suburb? But no, still no luck, I guess it’s not visible from this stretch of the F1 fietsostrade.

I meet up with mom at 08:45 at the south edge of the city and since we’re planning to go north, we first we need to get to the other side. It’s probably faster to go straight through the center, but then you have the annoyance of traffic lights, busy streets and narrow roads, so we stick with the easy way and follow the peripheral road. Sounds unpleasant, but actually this wide and smooth surfaced bicycle path runs through a wide band of green that is home to a lot of birds and rabbits. This is the same peripheral path I take to work, though we’re now following it east instead of west. Pretty quiet at this early hour on Sunday.

The path ducks left and right, going under/over bridges to make its way north, going through the Rivierenhof and Park Spoor Noord city parks before crossing the Albert Canal over the new pedestrian bridge. From here we make our way through the town of Merksem. I lived in this town a few years and got married in its town hall, but had not yet seen the pretty and quiet residential area we now go through. Though I suppose it’s a lot quieter than usual due to the corona crisis and the restrictions on car travel.

We cycle around the star shape of the Merksem Fort, it was built before the first world war as part of the big defensive line around Antwerp, but by the time the Germans arrived technology had advanced so much that the non-reinforced concrete could not withstand the new artillery. Many of the buildings were destroyed, but the areas immediately surrounding the water-filled wide ditches are now green oases in the middle of the suburbs.

With the fort we leave the buildings behind, though we’re still surrounded by busy suburbs. We discover peace and quiet in the allotment gardes of Merksem and then dive into the trees of Peerdsbos park. I honestly had no idea we had this many trees this close to town! An educational panel explains it: it was sold in the late Middle Ages by nobility to a hospital, which used it to augment their income. Some parts were sold off, but a chunk of it remained and in 1936 was leased to the city of Antwerp on the condition they make it into a public park. It is one of the few forests in the area that is older than a few hundred years (I got this from the interesting book ‘Oude bossen van de Antwerpse Kempen’ by Sara Adriaenssens and Kris Verheyen). Due to the continuous cultivation by humans in the last thousands of years, it’s much easier to find monumental old buildings than old forests.

Where six of the big lanes intersect we encounter an obilisk with latin inscription, but I when I try to find its history while we take a short break on a bench nearby, I can honestly not find what it’s for. N.B. I did some extensive googling later and I found a newspaper article stating it was a gift from count Georges Reusens to his brother Armand, who was mayor of Brasschaat. It was built for this occasion by an Italian in 1884, but I still don’t know what the inscription says.

After the park we cross a residentional neighborhood before moving back under a green canopy. Until this point we’ve been going more or less north with the wind against us, but now we’re finally turning east, starting a long half circle back to where we started. We’re on gravel again and this influences what kind of people you meet, the gravel is unsuitable for light racing bikes so there’s nobody speeding by and the people we do encounter here are either out for a walk with their dog or having a family outing by bike, so everybody is relaxed and taking it easy. We start wondering about the waterway we’re following, it’s clearly a manmade canal, but too narrow for transport and instead of following a straight line it seems to kink across the landscape for no reason. At regular intervals there are ruins of fortifications built over the width of the canal. They seem to manage the water level on each side and look like they’re built of concrete, but with a weird, scalloped surface.

Thanks to Google and 4G we find out that we’re cycling along the Antitankgracht (anti-tank ditch) which was added to the Antwerp defense project after it turned out the forts were not very useful against heavy artillery. The sides of it are too steep for tanks of that era to cross safely. The canal runs all the way from the big Albert canal at the east of Antwerp to the Scheldt river just north of it, connecting some of the old forts from the 19th century. After the second world war it was left for nature to reconquer and now it’s a narrow but long green lint, connecting different nature preserves and welcoming hikers and cyclists.

The fort of ‘s-Gravenwezel was completely razed and is now home to a small village surrounded by its own star-shaped ditch. Fort De Schans was blown up by the Belgian army before the Germans could conquer it and is now home to a bat preserve. The giant concrete pieces of the fort are still laying around like fallen lego blocks. If you want to read more, you can find an intestering overview of the history of the forts and canals here (only in Dutch) or – in English but more briefly – here on Wikipedia.

After a quick lunch on a bench (I brought a tomato salad and mum an egg sandwich) we continue south. It’s still pretty chilly and the high grey clouds block out the sun, so on a quiet bit of forest track I quickly strip down to my sports bra and put on the merino thermal. Together with the wind jacket and light gloves this is much better.

When we meet up with the Albert canal we come to the end of the anti-tank ditch. We cross the canal and move south through the fields, first a bit left and right at random but soon we come to another leftover of the wars: the S.A.F.I. track. Officially it’s called Spoorlijn 205 and it was a long military railroad just outside of the outer ring of forts. The part between Lier and Broechem that we’re on now is the only part that was later in use by the belgian rail road company and when that finally fell into disuse the whole thing was converted to a car-free road.

We have a lot of these in Belgium and they’re a lot of fun, since they mostly run between fields and behind houses. On top of that the incline of these old tracks never exceeds 3%, which is especially helpful in hilly areas! In Wallony they’re called Ravels, in Spain Vias Verdes and in English green ways, there’s even a European project to promote the exploitation of old railroad tracks and tow paths and to make them available for slow traffic. My mom has a list of all the green ways in Belgium and is making a point of cycling all of them. I think you could cross the whole of Belgium on car-free roads. The only disadvantage of these long straight roads is that they’re popular with light racer bikes, so you have to leave some room – and have some patience – for them to pass you.

We’re getting closer to the end of our loop now. We cross the railroad Antwerp-Lier (it also has a bicycle path running beside it) and come to the corner between Lier, Lint, Hove and Boechout known as De Grote Boshoek – the big forest corner. It’s a mix of forest and pastures and much of it is managed as a nature preserve with a wide variety of wildlife and plants. From the road we’re following we can see the Uilenbos – the owl forest – and a few roe deer that are browsing in the fields. Soon we come to another railroad and can turn back north towards Antwerp.