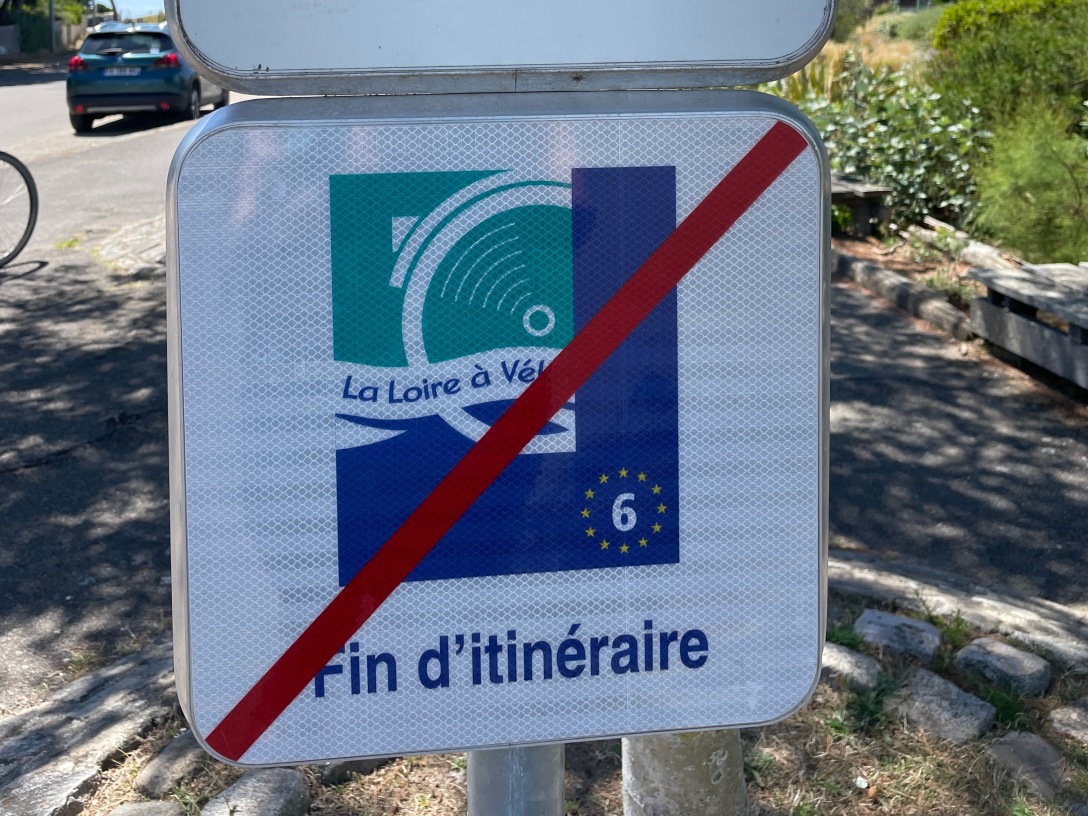 From Nantes we can make it in one go to the Atlantic coast near Saint-Nazaire. We get up extra early (seven!) in an attempt to avoid the tourist groups this hotel seems to specialize in, but fail utterly and have a basic breakfast in a very busy room: very quickly. We drag our bags to the basement parking, load up and are on our way earlier than usual (nine!). We admire the Pont de Cheviré, 1365 m long and 52 m high at its apogee, we wonder what they’re doing in Nantes that would require such a high clearance. After that we mostly ride on the edges of the valley, often can’t even see the Loire river, rather we’re going from one village to the next on quiet roads.

We continue to follow the Loire à vélo route, which is the same as the EuroVelo 6 from Nevers to the coast. You have to be quick and attentive to find the signposts, they come in different sizes and are placed sometimes before an intersection, sometimes attached to houses on the corner, not easy to follow and we need to stop to verify a few times. We buy lunch at a bakery in Le Pellerin: Swedish bread with duck and green peppers, something to look forward to. I can’t resist the cookies and buy two: something more to look forward to! Soon we encounter the Canal de la Martinière, constructed in the 19th century and then much used, but obsolete after twenty years because it was by then too small for the bigger and bigger boats and ship-building industry was moved from Nantes to Saint-Nazaire.

We have our sandwich at one of the technical sites of the canal, where there are locks connecting it to the marshes and inland canals and the machinery to manage the water levels. Since it’s no longer used for industry, there’s only cyclists and fishermen about, but unfortunately not a lot of benches. We actually didn’t encounter many other trekkers until this time and then suddenly there’s no end of them. I postulate this is because they all left at the coast (the starting point of this route) around the same time in the morning. Normally everybody is kind of spread out, because they do different mileage per day and sleep in different locations, but here we are near the starting point so they’re bunched together.

The final section of the trail runs right by the Loire, with great views of the Saint-Nazaire port industry and another huge bridge: the Pont de Saint-Nazaire. This is the longest bridge in France with 3356 m, 61 m high. We can see some container cargo ships in front of it and two cruise ships under construction right behind it, that really gives you a sense of the dimensions of this 40 year old edifice. You can traverse it by bike, but it’s strongly discouraged and a free shuttle runs in the high season to transport bikes and bikers to the other side. The high season started yesterday, so I’ll think we’ll make use of that tomorrow. I don’t want to cycle over it, aside from the fact that there’s no separate path for cyclists, if the wind is anything like today you’re likely to be literally blown today. There are times in the afternoon that we can’t even chat normally because words are just ripped away right after they come out of your mouth.

We find the starting point of the route we’ve been following for the last nine days, but make no more of the moment than to take a picture of the signpost, we’re not quite done for the day and we’ll do some more cycling tomorrow to get back to our car, so it doesn’t feel like the end of the journey for us. We check in at the hotel, take a walk on the beach (room isn’t ready yet) and do our usual afternoon routine: shower/bath, write the blog, make a restaurant reservation and generally relax. We have a room looking out over the beach and enjoy the sound of the surf. Still haven’t found a book, though.