We’re ready to leave even earlier than before, but right as we want to sweep out of the castle courtyard Arne’s luggage frame drops right off his bike. It seems it was being held on the bike with four screws, which have all come loose. No problem, we get the bags off, MacGyver it back together and tighten three of the screws, the fourth is a total loss. It seems to hold and we take off around nine. We immediately see the wind is still strong and coming from the west, excellent news as today we start making our way back east (this being the southern part of the western tour). It’s sunny for now, but the radar promises showers throughout the day. We sit out the first rain shower on a bench underneath a big tree: we can see the weather coming up from behind us and the rain is short and heavy enough to warrant shelter.

The first thirty kilometers goes by like a dream: we follow the Bocholter Aa – again, but upstream this time – on quiet towpaths. It looks like it was used for boat traffic at some time, but now they’re returning it back to the wild, creating little islets with old trees, allowing sand banks to rise. We see a cormorant, herons and lots of different types of ducks. In Krechting we encounter the tiniest hydroelectric power station I’ve ever seen: a dam of about three meters high, a big screw and a special rocky waterfall that allows the fish to travel upstream past the dam. According to the managing company, over a 1000 fish per day use it.

We take a short break at the Aa-See (meaning lake of the Aa river) in Bocholt, but decide to push on to Raesfeld for lunch. We’re back on asphalt roads between the corn fields, though the wind in the back allows for faster cruise speeds. We admire the Schloss Raesfeld, the counter is at 40 km, it’s one pm and we have a warm lunch at one of the many restaurants nearby. 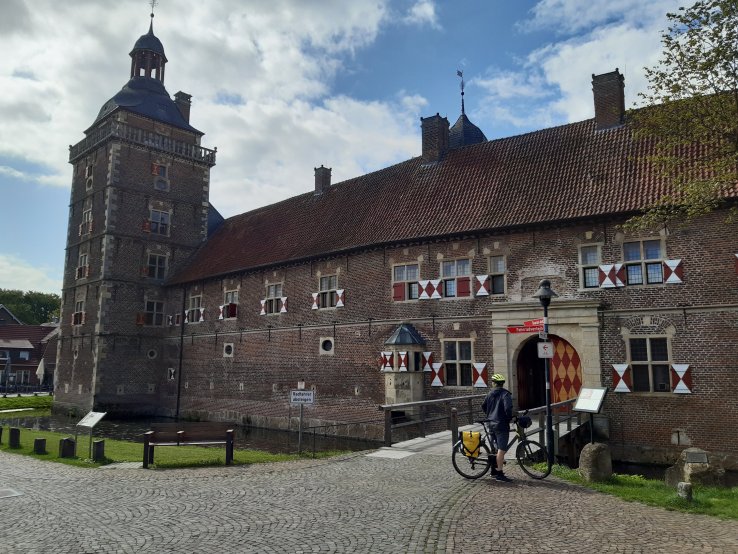 After lunch we continue on, driving from one forest to the next between more corn. We spot a roe deer and its calf in one of the forest tracks leading off into fields and have a few moments to admire them, before they dash off. Arne cycles up the track for a moment and sees them bouncing away into the forest, but we don’t manage to get a picture. In all the excitement we miss a turn, but we notice pretty quickly. Since the route seems to wander through a forested area, we decide to go back half a kilometer and take the correct path. We have a nice view of Schloss Lembeck from the forest, unfortunately we can’t really admire it from close by, as it’s a museum and you have to pay to get in. Even worse, the castle café is closed, we were really looking forward to having a piece of pie but must settle for a bit of canteen water. We’re not far from our destination anyway, might as well drive on.

We arrive around five in Lippramsdorf, our hotel is right by the route. Shower, then an extremely early dinner. It’s now almost seven and we’re considering dessert.