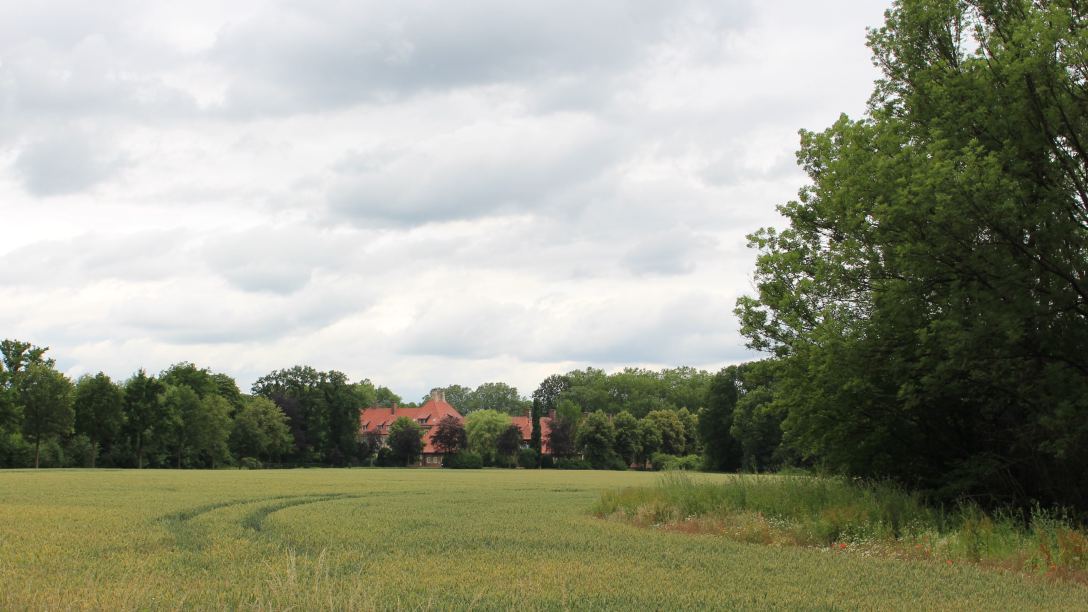 Breakfast is served at the table in a large, empty dining room, I think we must be the only guests in this hotel. Some restaurant and hotel people say it’s a bit quiet, but not too bad, mainly the foreign tourists are missing. Other hotel owners say it’s been too quiet and are worried about how they’re going to make it..

We take the bikes out of the empty bike garage – you can tell it’s a Bett und Bike hotel because of the amenities for bikers – under a threatening sky. We put on sunscreen nonetheless, I think I would feel naked without it by now, and we set out in our usual t-shirt/biker shorts combination. Not very elegant, but comfort is more important to me. I have a bright bike tshirt – Italian, I had to get the biggest size, can you believe it – in black with bright flowers, the bumblebees love it. Anyway, we’re only borderline warm enough when we start out and we have our rain jackets close at hand.

We’re using the GPS for navigation, since it will guide us by several big houses or castles that are just off the route. We’re on our way to Mersch when we spot a big bird of prey chasing off a jackdaw just overhead. It’s not the usual buzzard so when it lands in a field nearby we stop for a closer look through the zoom lens. Pretty far away still and it’s difficult to recognize, so I open the BirdSounds Europe app to see if we can identify it by its call. Pretty quickly we find out it’s a red kite, rare in Belgium but there’s a apparently a large population in Germany. It even calls back to us when I play the call from the app.

This is a great area for wildlife watching, while we’re waiting for the kite to take off again and show us the color of his wings – it doesn’t – we see two kestrels fighting it out in the air, a hare crossing the field near the kite and the usual mass of small song birds. A few days earlier we saw a yellowhammer sitting prettily on a pole and we’ve seen all kinds of woodpeckers. Most of the time on the bike we just have the sound of buzzing insects, twittering song birds and the occasional call of a bird of prey, I love it.

Anyway, on to the castle. Or rather, back a ways because the route I picked on the map turns out to be private, oops. Nevermind, I can easily see a way around it and soon we come to Schloss Ittlingen. It’s in private hands and it looks like it’s a horse farm, again. Like many of these castles it sits in its own complex of moats and has brightly painted wooden shutters, giving it a very medieval feel. Cycling away from the castle we spot a deer in the corn field. It hops away but we see it again as it crosses from one field to the next, looks like a red deer this time.

A bit further on we have a look from the gate at Haus Venne and continue our way west and north. Schloss Drehsteinfurt is well hidden in the trees, but is surrounded by a beautiful park, we take a moment for a break while I (quickly) switch tshirts from ultra light bike shirt to merino wool tshirt and put on a light sweater for the first time this holiday.

It’s a bit early for lunch still and the next town is only 12 km away, so we decided to make a go for it. You have to be careful in the weekend here, a lot of bakeries close right after lunch and even if the little towns have a restaurant, it will often be closed for lunch on Sunday. We do have a back-up plan in the energy bars, but even so we don’t dawdle and make it to Ascheberg at half past eleven. Getting here required quite some effort, the landscape is not very hilly but that advantage is completely negated today by a strong wind from the west. So the whole 12 km before lunch are a steady fight against the wind.

Fortunately there’s a big bakery with inside seating and I splurge on a chocolate chip sandwich (not a dessert, I swear) and a Rosinnenschnecken, difficult to explain, just google it if you’re curious. The trick for a relaxed lunch is to find a window seat and put the bikes right on the other side. They’re locked so nobody can take off with them and we would easily see it if somebody was messing with the bags. Only 20 km to go to the car..

After lunch the cycling goes much easier, as for here on it’s north and east, with the wind behind us. We pass by Haus Romberg, Haus Byink, Burgturm Davensdorf and Haus Bisping. Can you imagine living in this area.. I only notice how quiet it really is around here when we have to cross the highway. I guess the quietness is partly due to corona: there’s a lot less air traffic overhead and also less long distance car travelling. The places we visit are lively, but mostly with locals. Today we see a few sport cyclists, but a lot less people than last Sunday, I guess that’s due to the changeable weather. We do get a few drops of rain and the sky continuous to look impressively threatening, but we only have to put on our rain jackets for half an hour in the morning.

For our final leg of the journey we follow a charming bike path along the Werse river, we’ve encountered it a few times already. We discuss the high lights of the holiday, decide on some awards and also what could have gone better, to improve for next time. We’re at the car around two, it takes half an hour to get everything in/on the car and when we depart we quietly freak out for a few minutes while getting used to speeds higher than 30 kmph. I’m not kidding, it’s scary! Home safe around five, chicken wings, pizza and Ben & Jerry’s for dinner/desssert and one quick laundry cycle, tomorrow I’m taking the bike to work.. It’s getting late now, so I’ll write the summary (there will be awards) tomorrow!