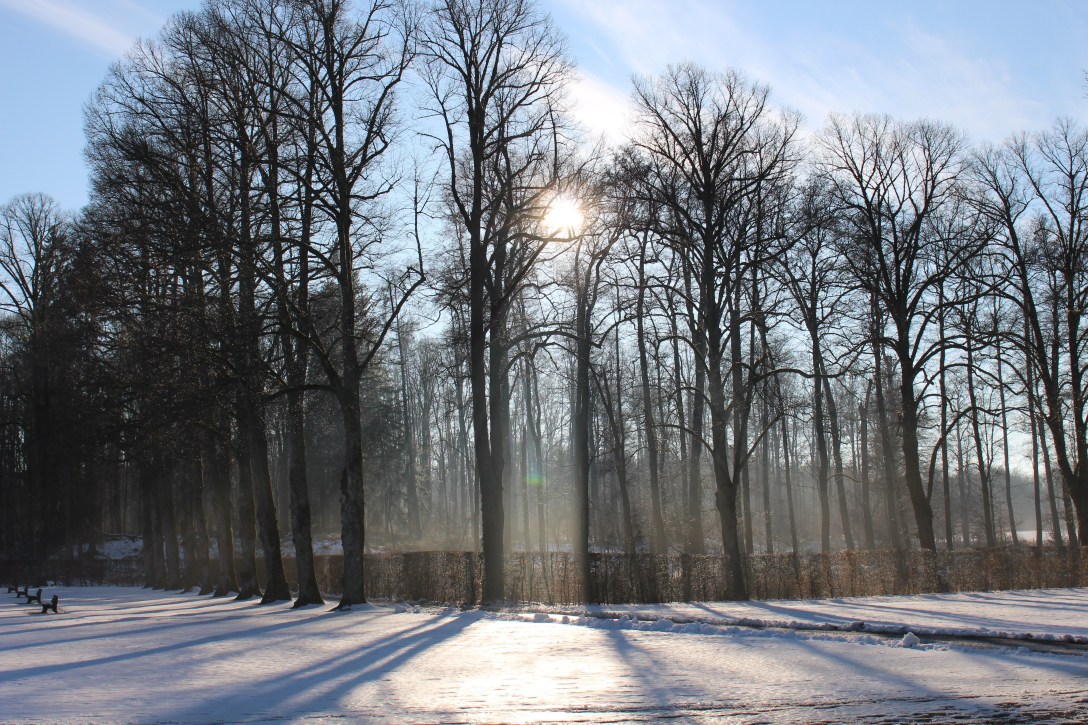 Today is a resting day, that means no backpacks, no heavy hiking boots and not too much snow. We are planning to visit Herrenchiemsee, a 238 ha island in the Chiemsee lake, not to far from where we’re sleeping. The morning dawns clear, without the usual blanket of fog, but the temperature is well below zero. We didn’t manage to preheat the car, probably because the battery is almost empty, so it’s still completely frosted over when we’re ready to leave. We can open the doors, but every outer surface including the glass is covered with a suprisingly hard layer of frost. I think we’re looking at the result of desubliming or deposition, where water suspended in the air (visible as fog) freezes directly onto colder surfaces. The big tree next to the hotel is equally covered, twinkling at us in the sun.

Along our route north the car indicates temperatures ranging from -9,5°C to -2 at the lake itself. We have some time before the ferry is scheduled to leave, so we decide to take the scenic route along the north shore of the huge lake. Turns out to be not very scenic, because the whole lake vally is filled with a dense fog. On top of that, we encounter a road closure, forcing us to go waaay around and we’re suddenly not sure we’ll make it on time to that ferry. Arne uses his best driving skills, I check out where to go on my smartphone and we decide to go for it. We hurry into a parking spot with a few minutes to spare and run for it, making it onto the small tourist boat right before it takes off. Still in the fog, we cannot see further than 40 or 50 m. The lake is extremely still and I can barely feel the boat move.

On the island we buy a ticket for the castle visit and hike up. From the size of the infrastructure I can tell it must get pretty busy here sometimes, but right now there’s only a few tourists like us. The castle is pretty boring on the outside, but weirdly and hugely ostentatious on the inside, at least in those rooms that were finished. This is one of the three king’s castles built by King Ludwig II: Neuschwanstein (that we visited earlier this week), Linderhof and this one, the most expansive and expensive Herrenchiemsee. The castle may only be visited with a guide, but it’s definitely worth it. I have seen quite a few castles, but none so richly decorated, it’s gaudy and over the top. The cost of it is staggering, especially knowing the king spent only ten days here in total and that Neuschwanstein is equally unfinished. How many unfinished castles does a king need? We take a quick tour in the museum about King Ludwig II and then set out to explore the island itself.

We encounter nobody in the woods, except a few deer in a large enclosure and lots of birds near the shore. The sun finally managed to dissolve the fog and we have great views over the lake towards the mountains and the nearby Frauenchiemsee. If you speak a bit of German, you’ll notice that there’s a men’s island (Herren) and a women’s (Frauen). I can only assume it’s because they both held convents, one for men and one for women. We wander around, do a quick tour of the old castle and walk to the lake chapel to kill the time before the ferry back to the mainland. Our ticket includes a trip to Frauenchiemsee, but it is a resting day and we’re ready to wrap up and go rest. We have a delicious steak for dinner and watch the final episode of Picard for dessert. At the end of the day I have about 19.000 steps on my counter, not bad for a resting day.