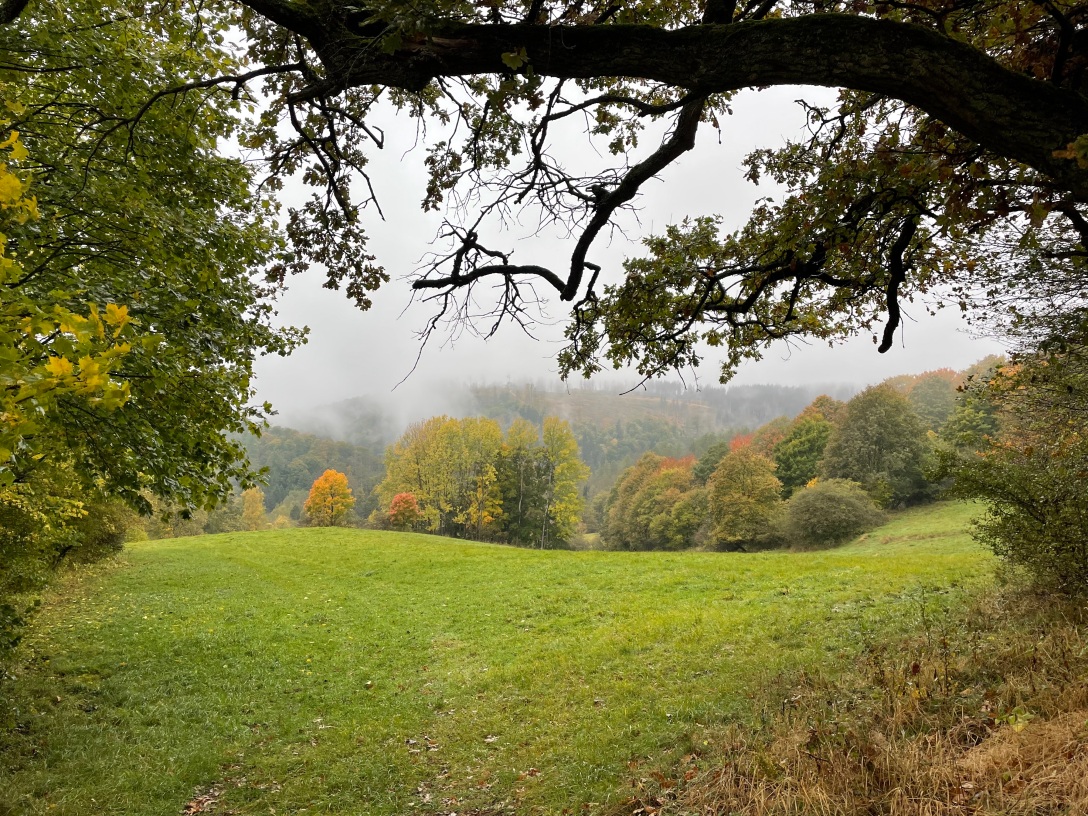 Alarm at 7. I slept well, we leave the window open at night for fresh air, so the room is chilly but I’m warm under the thick blanket. We already have a plan for today, so it’s just the usual routine to get ready. I run out of ham when fixing lunch, so use the bacon leftover from the carbonara yesterday. Extra mustard! It’s a skill to pack the rolls back into a bag in such a way that they’re still correctly layered when we get them out for lunch. I also brought some sort of cookie from the bakery this morning, it joins the lunch bag. We set out around 9:30 in the fog, or rather, in the clouds. We’re leaving on foot from the apartment in Hohegeiß at 600 m above sea level and it gets foggier (cloudier) the further we descend.

The route I drew yesterday first brings us down to the Wolfsbachmühle, or mill of the wolf’s brook. We follow a small path right down the middle of a meadow, which is restricted for pedestrians in winter because it’s used for sledding. From the old mill we follow the Briefträgerweg or the post man’s road, which is a tiny path used by the post man, in times before roads and cars. Also inaccessible in winter, this time because it’s too dangerous when icy. The path climbs the slope above the Wolfsbach, through mixed forest with beech, maple and of course the ever present spruces. It’s a dense forest and the clouds muffle the sounds, it’s like we’re all alone. Actually, we don’t encounter any other hikers, so we are mostly alone. We visit the Dicke Tannen natural monument, a single slope over the creek below that still has some of the really old spruces that used to grow naturally in this area. They’re between 350 and 400 years old, up to 50 m high, towering above the surround deciduous trees that even older. They’re not easy to spot from the upper road, because the other trees are still in leaf and blocking the view, but from the lower road we can see them sticking out, straight as a ruler. In times where they might have been cut down for lumber, they were already so thick that axes couldn’t fell them and trucks couldn’t carry them anyway, so they were left standing. in 1900 there were 120, now 21 are still alive. in 2001, 9 had to be felled and they had to call in specialists with explosives.

We skirt a nameless hill, the old grassy logging roads following the contour lines. There is a slight but continuous drizzle, or rather the rain in the cloud we’re walking through condenses around us. It’s not much, but I keep on my rain poncho to protect the camera. The long grass makes our shoes wet and it turns out they’re not as watertight as we anticipated, so by the time we stop for lunch we have wet feet. We climb up a few meters from the road and get installed in a hunter’s lookout. After Arne puts his wet socks back on and we continue a bit in the drizzle, we decide to take a short cut and head back along the forestry road towards the Wolfsbachmühle. We finish our walk in the Kurpark or spa park, many of the villages here are official ‘air spa towns’, meaning they have a a high standard of air quality. We’re back at the apartment around 14:30 and decide – predictably – to hang out and chillax. We shower and put on dry clothes, walk to the local store for dinner stuff (bratwurst, buns, tomato and salad) and watch the first episodes of The Squid Game.

Today’s statistics are unclear, the tracker app said we did 15 km but that doesn’t make sense since we took a shortcut. I trace it again on the routing app and come up with 12,3 km, with about 300 m ascent and descent.